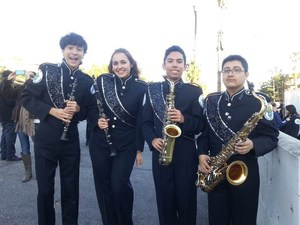 Congratulations to band members Joel Guiterrez, Alexis Fabricio, Dylan Rockenbach and Joseph Velardez as they performed in the Hollywood Christmas Parade with the LA Catholic Schools Band will be airing this Friday, Dec. 11 at 8:00pm on The CW.

The Los Angeles Catholic Schools Band performs for the third time at the Hollywood Christmas Parade. The band was formed in 2013 to showcase the musicians and color guard of the Catholic Schools of the Archdiocese of Los Angeles. The band's inaugural performance was at the Hollywood Christmas Parade that same year. This year, the battery (drumline) was reduced in size to balance the sound with the brass and wind sections. Personally, I prefer a bigger battery specially when performing their signature drum cadence, "Rampage". The band sounded as awesome as ever.