Two student-athletes make it official by signing Letters of Intent 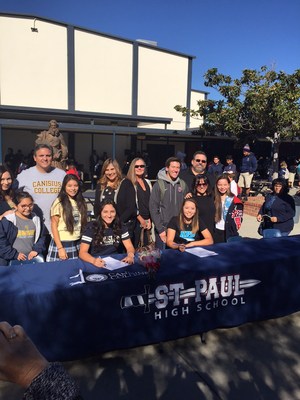 Congratulations to two seniors who made it official on Tuesday, November 17th as they signed their Letter of Intent to become a student-athlete at their respective colleges. The Letter of Intent is a binding agreement between the student-athlete and a college by which the student-athlete agrees to attend the college for one academic year. The following student-athletes signed Letters of Intent:
Sydney Kreimann of Whittier is signing with Canisius College in Buffalo, New York. Kreimann has been selected as a First Team All-League player, First-Team All-Area player and has made multiple All Tournament teams. She has been awarded the team Coaches Award, Defensive Player Award, and 110% award. She was a part of the CIF and State Championship team in 2014. In the classroom, Kreimann carries a 3.5 GPA.
Emilee Leonard of La Mirada is signing with Hawaii Pacific University. Leonard has been named 2nd Team All-CIF and is part of the CIF and State Championship team. In the classroom, Leonard carries a 3.8 GPA.
Published November 17, 2015 Print