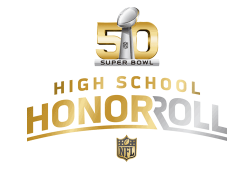 St. Paul High School is proud to be the home of two NFL players who were talented and fortunate to have played in a Super Bowl. Matt Willig, class of 1987, who won a Super Bowl ring with the St. Louis Rams in 1999 and appeared in the Super Bowl with the Carolina Panthers in 2004. Bill Bain, class of 1970, who made a Super Bowl appearance with the Los Angeles Rams in 1980.

The NFL and the Super Bowl High School Honor Roll platform channel the past 49 Super Bowls with this year’s game and honors the high schools and communities that have positively impacted the game of football. Only 3,000 players and coaches from 2,000 different high schools in the nation will be recognized this season.